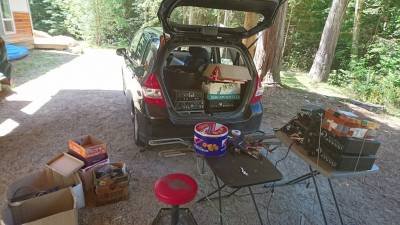 On Saturday, I went to Jim's place in Sechelt to collect the donation he made to the club. Most of the equipment consisted of old CB radios, power supplies, SWR meters, speakers, and mobile antennas. But there were also two Marine Mobile radios and one newer Air Band Hand Held. After spending most of the day Sunday and a few more hours Monday sorting the equipment and recycling the defective stuff, I packed everything and stored it at Robert's place.

So if you're interested in experimenting with CBs, or need a power supply, let us know, the club will gladly accept a small donation to get it out of Robert's space.