I recently purchased the N8XJK Super Booster. Here are my initial impressions (I'll update this post later if anything changes).

West Mountain Radio makes great product, but their shipping to Canada is pretty expensive. Here is what it would have cost to get the booster shipped here (in USD):

Thankfully, GPS Central in Alberta carries West Mountain Radio gear and sells it for pretty much the same price (after exchange rate):

The Power Booster is currently not listed on GPS Central's website, but I sent them an email and they have it in stock so I was able to buy it over the phone, and I received it 3 days later.

Radio World in Ontario also carries West Mountain Radio equipment, but their shipping is a bit more expensive (probably because of distance). Here's the shipping options for a similarly sized item (they also don't have the Power Boost on their website yet): 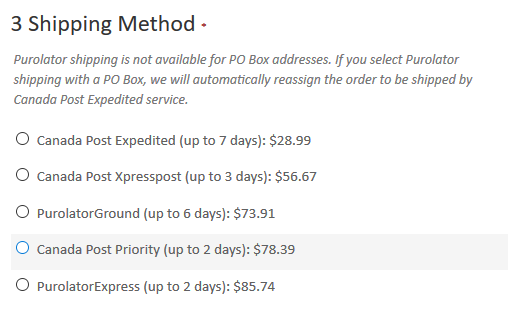 We have a list of retailers on the Link page sorted by distance (and most-likely by shipping prices).

The Power Booster is meant to boost the voltage of a battery that's as low as 10.5V to as high as 15V.

The idea is that while transmitting at high power (say 50W or 100W), the voltage that the radio sees can easily drop below 11.7V because of the voltage drop. This is totally fine for the battery, but many radios need at least 11.7V to function properly. So without the booster, a battery that is still 50% full could be useless for transmitting at high power. The Booster ensures that the radio sees a constant voltage above 13V even if the battery drops below 11.7V, which allows us to use more of the battery's stored energy.

My Setup and First Impressions

Here are a few observations so far:

The voltage drop upon connecting the booster is likely due to the large capacitors in the booster. As they charge there is a large current surge and depending on the power supply and wiring that can cause a voltage drop.“

So far, I'm pretty happy with the unit.