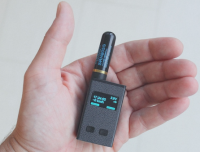 Described as the “World's smallest APRS Transceiver by DB1NTO”, the PicoAPRS can be used as:

Here are some screenshots:

It outputs 1W and you'll need to buy a separate antenna. The PicoAPRS's antenna port is a female SMA port (so you'll need an antenna with a male SMA connector), so Baofeng antennas won't work.

DX Engineering sells it for $220 and the user comments there are pretty informative: it seems that unless you're in an area with lots of digipeaters, using this unit with a portable antenna and its meagre 1W won't work as a mobile APRS station. However, people have used it as a tracker for drones or even as a drone APRS digipeater.

It's pretty cool, but I can think of a lot of other things I'd spend $220 on before buying this (unless I had a drone I guess).