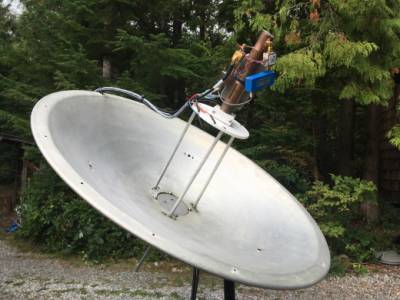 Scott Tilley, VE7TIL, in [Roberts Creek] British Columbia, Canada, received a signal from the NASA Mars Reconnaissance Orbiter (MRO), flying just 274 kilometers (about 170 miles) above the red planet’s surface. The signal was an X-band carrier containing no data or telemetry.

“Its purpose is to allow for Doppler tracking,” Tilley explained. “The rapid change in pitch of the signal is caused by the relative motion of the satellite and the observer.” He used a homemade satellite dish to hear the orbiter.

Tilley enjoys tracking down signals from “dead” satellites, zombie satellites, and spy satellites, but the MRO was a first for him. “MRO’s signal is weak, but it is one of the louder signals in Mars orbit,” he said. “The spacecraft has a large dish antenna it uses as a relay for other Mars missions. With the proximity of Mars these days, it was the perfect time to try.”

In 2018, Tilley saw the “signature” of the Imager for Magnetopause-to-Aurora Global Exploration (IMAGE), a NASA spacecraft believed to have died in 2005. That discovery delighted space scientists.

The Oct 7, 2020 Archive of spaceweather.com has the full story with a video of the signal.