I used this on the recent CQ DX contest as a SOSB on 20 meters. Granted, it was a contest, so LOTS of people were on air but this antenna allowed QSO with Alaska, Hawaii, Japan, Columbia, Brazil, Cayman Islands, Chile, Mexico on an Icom 750 at “100” Watts. QTH was ideal for propagation, ground soil looked good, but regardless, it seems to show that even a simple antenna can work. On a normal day I was getting to various points in the US and once, DX to Rarotonga.

SWR were mostly ~ 1.5 or lower with occasional spikes, reflected power was low. I operated from a deep cycle battery. Though the coax feed line was less than 30' (including amount on choke), assuming there was some common mode current present, a 1:1 toroid type choke might improve antenna system efficiency more than the air wound choke. Choke is about 3' away from feed point. Locating it closer to feed point seemed to hinder performance.

Though I used insulated wire, there might be a risk of someone or animal getting RF burn. But, area was at a dead end with lots of brush around and I had a clear view of vertical and radials while operating. Radials were slightly above ground, at a low angle, but even with wires on the ground, this seemed to make little to no difference to SWR levels and reflected power. Ideally, the insulated radial wires would be on the ground (less of a tripping hazard) but, I do wonder if voltage present at radials might ignite wood or other on hot dry days during a long TX at full power.

- jack stand strapped to wood base (I usually carry a jack stand in my van; van is old)

- coax through passive SWR/Power meter to rig; no ATU.

The antenna is designed for 20 meters. It can work with just the two longer radials.

Wood base did not topple over but i laid logs on it just in case.

This antenna can also attach to my camper van when top is raised. Antenna will work this way but for various reasons, i don't think it's a good idea.

In general, this antenna *seems* to work better overall vs the 20 meter inverted V dipole that attaches to my van. My goal is to make something low cost I can keep in van and shares parts I'd normally carry with me. And, I wanted it to work in a variety of settings. All that said, a Spider Beam pole would work quite well for this. ;)

This is a work in progress and not thoroughly field tested. e.g. not tested in high winds! 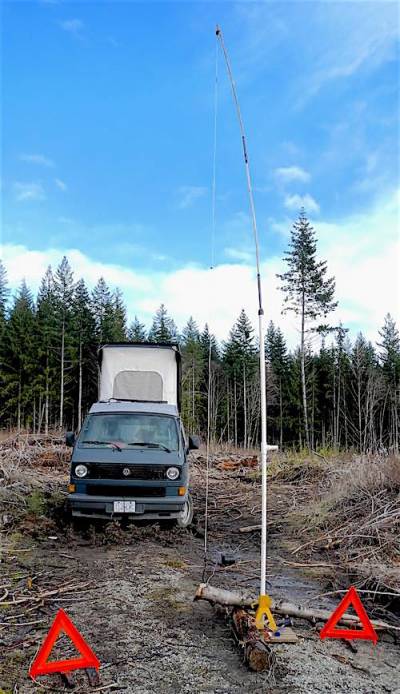 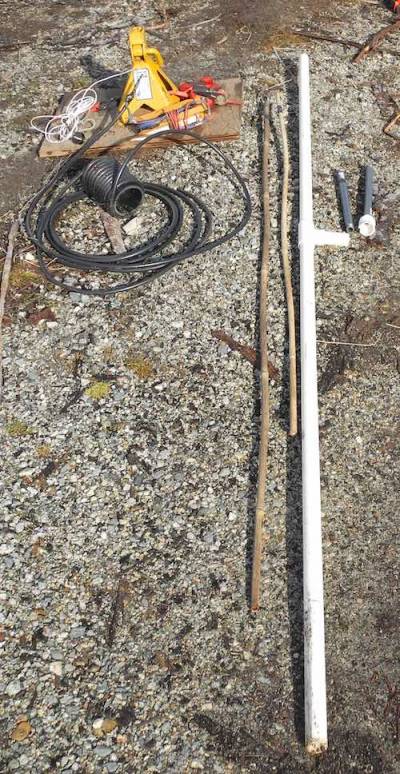