It is with sadness that we announce the passing of club member Bud Theriault. 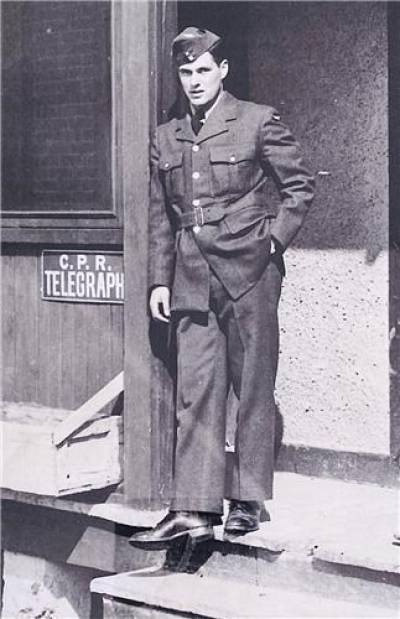 On July 14, 2021 Joseph (Bud) Theriault passed away peacefully with his family at his side. He will be remembered lovingly by Janet, his wife of 54 years, his daughter, Michelle (Faruq Suleman) and grandchildren Hayden, Laila and Sophie. As well as several nephews and nieces. Born November 16, 1929 in Digby Nova Scotia, he was the son of the late Benjamin and Margaret (Comeau) Theriault. He was predeceased by brother, Frank Boutilier and sister, Marie Dunbar. Also, his little dog, Neki.

Bud started an 18 year career of public service with the Royal Canadian Air Force (RCAF) in November, 1947 and proudly served until he was discharged on March 31, 1966. His time in the Air Force was spent in numerous postings including: the Northwest Territories, the Arctic, Edmonton and Grostenquin, France. Upon returning to Canada his last posting was with the RCAF Greenwood in Nova Scotia.

Soon after, Bud would embark on his second career as a Safety and Loss Control specialist. He worked with Standard Paving in Halifax Nova Scotia until 1969. He later held the position of Regional Safety Consultant for the province of Nova Scotia and was promoted to the position of Senior Safety Consultant for the Department of Labour where he was transferred to the national headquarters in Ottawa, Ontario. In 1971, he moved his family back to Cape Breton, Nova Scotia where he accepted the position of Director, Accident and Fire Prevention for the Cape Breton Development Corporation.

The family headed to Fort McMurray 1974 with Bud accepting a leadership position in safety and loss control with Syncrude Canada Ltd (SCL). Over the next decade the family would return to the east but would eventually return to Fort McMurray for a few years as Bud would manage safety programs for SCL's expansion projects.

In 1990, Bud and Janet made their final move to the beautiful Gibsons, British Columbia where he managed safety, loss control and camp operations for Howe Sound Pulp and Paper. Upon Bud's retirement they chose to “stay” retired in this little piece of heaven. Bud had so many hobbies and passions outside of work besides Janet and Michelle. His lifelong love was hands down Amateur radio (VA7BT). Many hours were spent in his 'ham shack' chatting with other operators across the world! You knew where Bud lived because there would always be 20' plus antenna outside his backyard and he would always be tinkering with it much to Janet's dismay (but continual support)! Photography was another great interest of Bud's and before the convenience of digital photography came along, he even had a darkroom in the basement where he would develop a lot of his own pictures. You could always count on a great slideshow from any trip that we may have taken! Bud always had computers and when not on his radios would be tinkering away on them. He was for the most part self-taught. Through the years he helped so many people with their computer problems and loved sharing any tips and tricks. In 1991, Bud realized his lifelong dream of obtaining his pilot's license and bought himself a few planes. He studied hard to make this a reality and he was so proud of his accomplishments.He was most proud of being able to take trips locally with Janet and even flew to Fort McMurray for a weekend visit with Michelle and Faruq.

Through it all Bud always gave back to the local community, he was active for over 50 years in the Masonic Lodge, the Shriners, the Royal Canadian Legion, a member of the United Church of Canada and was very proud to work with Janet in the Order of Eastern Star. He and Janet actively supported family, friends, neighbours, and anyone in need with a warm smile, a hearty meal, and anything else it took to make them smile and know somebody was in their corner!

As you read this, mom and I hope it brings a smile to your face because Bud lived life to its fullest, even after he received his Dementia/Alzheimer's diagnosis seven years ago. He always looked after anyone who came into his life and loved us all unconditionally. So go out and celebrate the life you have because that is the way Bud would have wanted it! We would like to sincerely thank the following individuals for their never ending support during these last years. Dr. Darren Spithoff and Ruth at the Gibsons Medical Clinic, the doctors, nurses & staff, 3rd floor, Sechelt Hospital, Shelley Chow and her staff at Help On The Way. A very special thank you to Debbie Peters for her years of care and compassion to both Bud and Janet. Lastly, to our neighbours, their never ending support was appreciated more than they will ever know.

A celebration of life for Bud will be planned in the coming months. Memorial donations can be made to the Alzheimer's Association or Sechelt Hospital, British Columbia.

“Into the arms of angels may you fly on a gentle breeze, with our love beside you and our arms around you.”