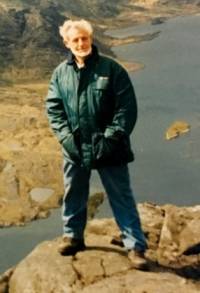 This weekend people will gather to remember the remarkable life of Harry Almond.

He was a founding member of the Sunshine Coast Search and Rescue. He joined in 1988 and was an active team member for many years, as a search manager and trainer, and he remained on the team until 2009. He was active on the Sunshine Coast Arts Council, chairman of the SCRD, painter, gardener and hiker. His love of climbing mountains took him to peaks in Garibaldi Park, the Coast Mountains and Lions Bay and Mount Baker. Further afield, Almond climbed to the peaks of the Cuillin Mountains on the Island of Skye, Scotland.

I had a chance to sit down with his daughter Kim recently and she loaned me her Dad’s memoirs, called Now I Remember. A fascinating read, he recalls the adventures of his life. He was born in Leeds, England and left when he joined the Royal Air Force at the age of 18, and was a ground observer (plane spotter) at posts in Cape Town, South Africa and in Burma. He wrote about travels through Africa, India and Europe. The memoirs also detail meeting his wife Molly, their move to Canada (Toronto initially), then New Zealand and eventually back to Vancouver, where he found a job working on the Ironworkers Memorial Bridge.

In 1959 the couple fell in love with the Sunshine Coast, when they took the ferry for a weekend visit. They eventually settled in Roberts Creek and had three children, David, Kim and Rob. The pair immersed themselves in community activities. Molly joined the Tide Water Players, a group that performed musical comedies at the community hall. They joined the Arts Council in Sechelt, and he became active in politics. After Molly’s death in 1978, Almond remarried. He and his new wife Rosemary continued travelling (Fiji, Greece, Portugal) and also continued contributing to the community in which they lived.

“Looking back on my life, there is no doubt I have been very fortunate,” Almond wrote in 2012. “Settling in Canada and in Roberts Creek was the right thing to do and I could not think of a better place to be,” he wrote. Surely, the community of Roberts Creek and indeed the Sunshine Coast will miss the contributions of Harry Almond.

Almond died in his 94th year, on Aug. 30. There will be a Celebration of Life ceremony at the Sunshine Coast Botanical Gardens from 2 to 5 p.m. on Sunday, Oct. 15.