How To Make A Radio Wave

Back on the Intro Page, we introduced to the idea of frequency and saw that

A Hertz (Hz) is a measure of how fast something vibrates [...]

Radio waves are created by oscillating electric currents. How many times this current oscillates per second is called the frequency, which is measured in Hz.

It's now time to add a few more details to this story. Here is a basic recipe for making a radio wave:

Voila! The antenna we've made is called a dipole. Assuming that its length matches the frequency of the current generator (more on this shortly), and that the antenna is high enough above the ground, you've created a radio wave.1) As electrons move up and down the length of the wires, they create varying electric and magnetic fields that couple together according to Maxwell's Equations and propagate outward in a doughnut shape.2) 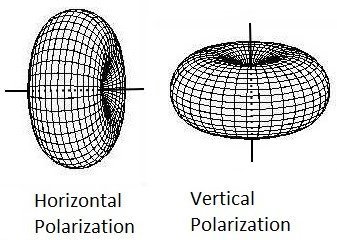 This “direction” is called polarization.

The polarization of an antenna is determined by the orientation of the electric field relative to the Earth's surface. So a horizontal antenna will produce a radio wave that has an horizontal electric field. The magnetic field part of the wave is always perpendicular to both the electric field and the direction of propagation, so in this case, it would be vertical.

In practice, polarization is more important for VHF and UHF communication because signals travel more or less directly from the transmitting antenna to the receiving one. For skywave HF communications, however, the ionosphere can change the polarization of the signal from moment to moment as the radio wave refracts, reflects, or goes through magnetic fields in the atmosphere. As such polarization of the antennas on HF frequency doesn't matter much because you never know what polarization your signal will end up having once it arrives at its destination.

As we saw previously, the wavelength (λ) in metres of the wave is dictated by the frequency \$f\$ in MHz and the speed of light:

We say “roughly” here because as we'll see later, the speed of electricity in a conductor is a bit less than the speed of light, so the antenna length end up a being roughly 5% shorter than calculated here.