Radio wave propagation describes the way in which radio waves travel from one point to another. As we saw in the previous page, radio waves (like light waves) have polarization and are affected by the phenomena of reflection, refraction, diffraction, and scattering. As we'll see next, these give rise to different ways that the signal can propagate through the atmosphere.

VHF radio waves (above 50 MHz) travel more or less in a straight line, and so cannot go much beyond the horizon. To increase the distance that an antenna can “see”, we raise our antennas as high as possible. The radio horizon is given roughly by: \$d = 4.12 \sqrt{h} \$ where \$d\$ is in kilometre and \$h\$ is in meters.1)

For example, VA7FI's antenna is 20m above the ground, at an elevation of 100m overlooking the water. It means that his antenna can see about 45 km in that direction.

For direct waves to occur, the height of the antenna needs to be many times greater than the wavelength of the radio wave so that the signal doesn't interact with the ground. In this example, the antenna (120m above sea level) is 60 wavelengths high on the 2 meter band, and 170 wavelengths on the 70 cm band.

Another similar station could be reached at about 90 km.

Ground waves occur when the signal curves with the Earth until it becomes too weak to be detected. This phenomena happens because of diffraction for vertically polarized radio waves when the frequency is below 3 MHz. The radio wave interacts with the ground where it loses some of its energy but also curves toward it. Depending on the frequency, these waves can go beyond the horizon out to about 200 km.

Depending on the frequency and atmospheric conditions, it's possible for radio waves going up to reflect back down to Earth. From our location in British Columbia, we can very easily talk to people in Japan using Skywaves.

This process uses Ionospheric Refraction, which we'll see next.2) 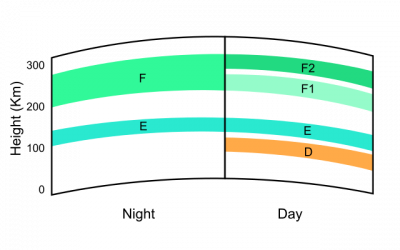 The region of our atmosphere between 50km and 400km altitude is called the ionosphere3), and to radio waves, it can act like:

The reason for this complex behaviour is that the ionosphere is composed of electrons and electrically charged atoms and molecules (called ions) caused by the Sun's ultraviolet radiation (solar flux). Gas at higher altitude is more ionized because it is less dense, which makes recombination into neutral molecules more difficult. Depending on the frequency, radio waves travelling into the ionized gas can see an index of refraction that is less than that of the air below, which means that they can refract and reflect the way light does through water. Also, because ionization depends primarily on the Sun's activity, three main cycles dictate the characteristics of the ionosphere:

Depending on the time of day, the ionosphere separates into 3 or 4 layers (of different gas composition):

The distance radio waves can propagate via ionospheric refraction depends on many factors:

Take Off Angle and Layer Height

A radio signal will reach further when:4)

The above animation is a gross oversimplification to illustrate the point that, all else being equal, signals sent near the horizon using the F layer will go further. For example:

In reality, the ionosphere is a medium with a continuously varying index of refraction rather than a series of discrete “mirrors”. As such, how much signals “curve” also depends on the takeoff angle, and just like what we saw in the previous section, there's a critical angle that must be met for Total Internal Reflection to occur. So the real picture is more like this one:5)

Note the following important terms on the above image:

And finally, real antennas do NOT transmit their signal at a single take off angle but over a range of them, which can vary depending on the antenna type and how high it is over the ground. So in reality, many of these paths are used at the same time and even reflect off the ground and go back for a second or third hop. Communications exceeding 5000 km uses multihop propagation, which looks like this:6) 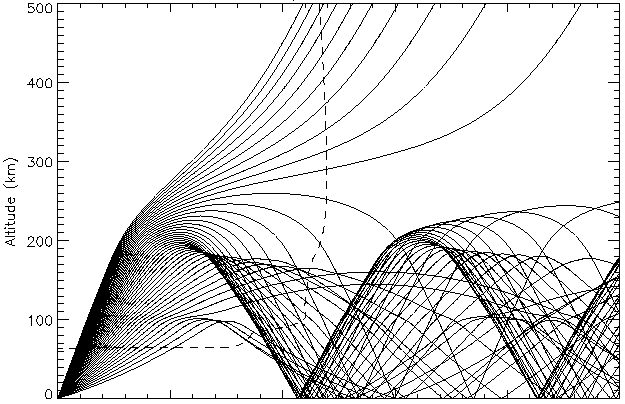 Whether a layer lets a radio signal through, reflects it back, or absorbs it depends on the frequency. In general:

In the previous animation, frequencies below 6 MHz don't get through the D layer, and frequencies above 44 Mhz escape into space. Only frequencies between the LUF and MUF get reflected back down to Earth by different layers.

Sometimes, depending on the atmospheric and/or solar conditions, the LUF, is greater than the MUF. In that case, no reflection is possible. Signals either get absorbed by the D layer, or get through all of them and escape into space:

In general, during the day:

Here's a map of MUF that's updated regularly. You can think of this as a “weather map” for ham radio.

Finally, because the D-Layer disappears before the F-Layer recombines, and reappears after the F-Layer splits, the propagation can be interesting around sunrise and sunset. This is called the gray zone.

Here's the animation if you want to move the dials and experiment with it yourself.

When meteors enter the ionosphere, they create intensely ionized columns of air that can scatter radio waves for very short periods of time (from a fraction of a second to a couple seconds per event). This mode can be used on VHF frequencies between 30 MHz and 100 MHz but is most effective on the 6m band (50 MHz).

Auroral activity creates strong ionization of the E-region. HF (and sometimes VHF) radio waves can backscatter and be heard up to 2000 km in the east-west direction. CW is the best mode to use to take advantage of this mode.

Sporadic-E propagation (not to be confused with ordinary E-layer propagation) takes advantage of ionization patches in the E-layer that drift westwards at speeds of a few hundreds of kilometres per hour. You can think of it as invisible clouds of ionized gases that move in the E-layer. If your signal is lucky enough to enter one of these clouds, it can bounce between 1000 and 2000 km in a single hop. Sporadic-E is most often observed on the 6m band.

In the previous section, we discussed how the Ionosphere (the region of our atmosphere between 50km and 400km altitude) can, reflect and refract radio waves, let them pass straight through, or absorbed them completely mostly due to the sun's ionization of the gas in these layers.

Here we discuss how the troposphere (the lowest region of our atmosphere below 20km altitude) can also affect radio waves because of variation in temperature, pressure, or water vapour content. Normal VHF tropospheric propagation can have a range of roughly 800 km.

The index of refraction of air is lower when the air is warmer. So during a temperature inversion, the air on the ground is colder than the air above, which means that radio waves go from a high to a low index of refraction medium (that is, from a slow to a fast medium). This causes the radio wave to refract back down toward the Earth. Tropospheric ducting is when the radio wave follows the curve of that inversion layer until it exits back to the Earth after travelling several hundreds of kilometres (up to 2000 kilometers).

Unlike Ionospheric refraction, Tropospheric ducting is observed at VHF frequencies as opposed to HF frequencies.

At VHF frequencies, small variations in the density of the troposphere (around 10 km) can scatter some of the radio waves back toward the ground to distances of 800 km.

Scattering can also allow HF signals from the skipzone to be heard. Scatter is most likely involved when weak or distorted signals near or above the maximum usable frequency (ie, they should escape into space) are heard over unusual paths.

1)
See Wikipedia: Line Of Sight Propagation for more details
2)
The previous three images were taken from Milo Carroll's Satellite Time Transfer presentation: http://slideplayer.com/slide/5941869/
3)
Picture from Wikipedia: Ionosphere
4)
The animations that follow are not to scale.
5)
Picture is from Fig. 2-14 at https://www.globalsecurity.org/intell/library/policy/army/fm/24-18/fm24-18_3.htm
6)
Picture from http://www.ferzkopp.net/Personal/Thesis/node8.html
howto/hambasics/sections/propagation.txt · Last modified: 2021/01/03 08:06 by va7fi