The next few sections use block diagrams to illustrate the configuration of various pieces of equipment. Here's an excellent introduction that should help with what follows:

Some of the components shown above may be integrated into one device, and others may be optional. But if all are included, this is how they should be connected.

All that being said, it's possible to go on HF with a transceiver that has a small integrated tuner in it, and a single antenna. It'll just be a matter of knowing which frequencies your system can transmit on, and stay within that range.

Review the Wave Modulation page. You should: 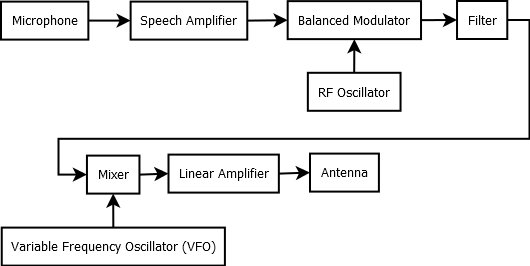 Note that a Frequency Mixer multiplies two signals together, which usually results in a total of four (or more) frequencies. This is not to be confused with an Audio Mixer, which adds different signals together. See the optional Wave Modulation Math page for more details.

Before we look at individual components, there's an important step we should highlight: The received radio frequency (RF) is converted down to a predetermined intermediate frequency (IF) before being processed further. This solves a lot of problems that plague simpler receivers. Now let's look at the details.

The goal of a regulated power supply is to convert household voltage (120 VAC) into DC voltage for the radio (13.8 VDC).