When an electromagnetic wave (radio, light, etc) hits a surface, it can do one or a mix of six things1): 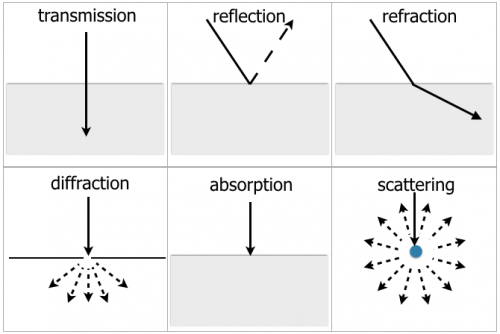 Let's start with refraction and reflection.

Imagine you're on the beach when you suddenly notice a child in distress in the water. You're a good swimmer but you can run faster than you can swim. What do you do?

Option 1: You make a B-line for the child because the shortest distance between two points is a straight line. 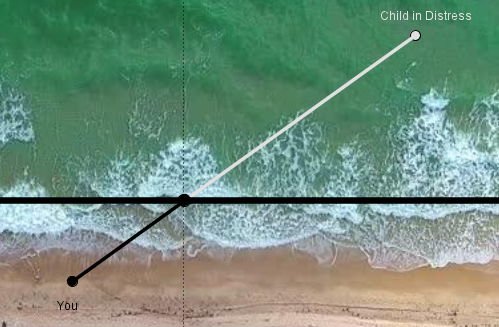 While it's true that this straight line is the shortest distance, it's not necessarily the fastest path. The problem here is that the water slows you down too much. It's better to cover more ground where you're faster and less where you're slower.

Option 2: You run until you're as close to the child as possible before jumping in the water to swim as little as possible. 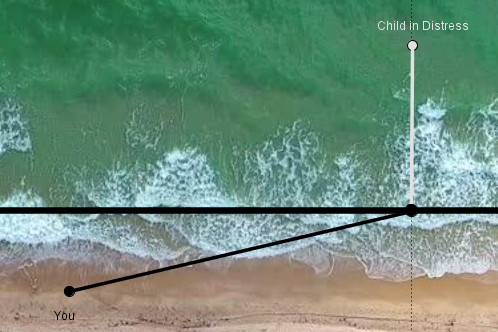 That path might be faster than the previous one, but it's not the fastest. Here's a thought experiment:

Option 2 would be the path to take if you could instantly teleport on the beach (but not in the water). In this case, you'd want to teleport as close to the child as possible, then swim the rest of the way. This path is when you can run infinitely fast.

Option 3: For regular running speeds, the quickest path is to enter the water somewhere in between. 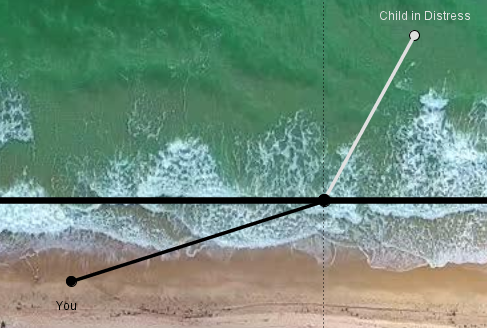 It turns out that, people have a pretty good intuition of where that “somewhere” is. But using Calculus, it's possible to find exactly where to enter the water to get to the child as quickly as possible.

In science classes, we learn that the speed of light is roughly 300,000,000 meters per second.2) But that's the speed of light in empty space. In air, glass, or water, light slows down. And since light has different speeds in different media, it means that, even for light, the quickest way to get from point A to point B is not necessarily a straight line.

If you shine a beam of light through a piece of glass, it will bend so as to get to the other side as quickly as possible.3) 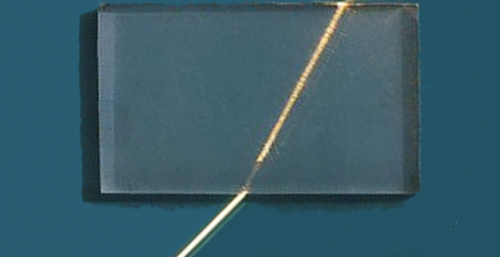 This principle is called Fermat's Principle of Least Time and in first year Calculus, students use this principle to derive Snell's Law of Refraction, taught in high school physics, which relates the angles of incidence and refraction to the refractive indices.

Qualitatively: If light enters a medium where it travels slower, it'll bend “inward” so as to spend less time in that medium (like the picture above).

But what if light goes into a medium where it can travel faster? Then this happens: 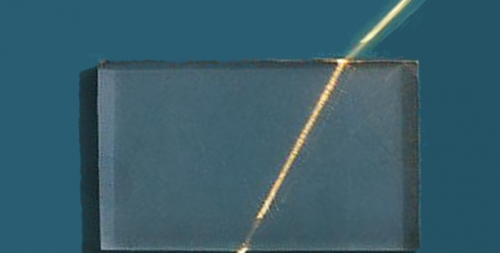 If this last one feels weird to you, imagine this: suppose you're a turtle who can swim faster than you can walk. It makes sense that you'd want to spend more time in the water and less on the beach: 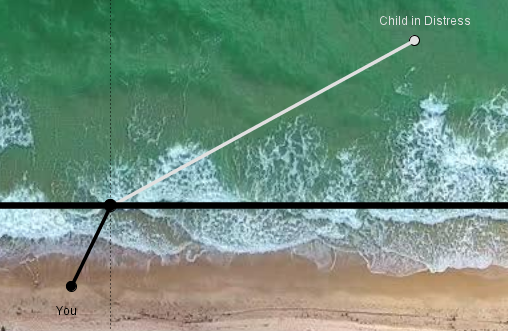 This second case (going from a “slow” medium to a “fast” medium) is really interesting because at some point, the light beam bends so much that it “exits” parallel to the surface, and then reflects like a mirror:4)

This behaviour is a bit hard to explain without going into the math, but here's an animation that allows you to explore it:

A few things to try:

Here's an underwater picture that VA7FI took in a lake with a waterproof camera. The camera is completely submerged under water looking up toward the surface. Above a certain angle, it's possible to see the beach, trees, and the sky. But below that angle, we see the reflection of his wetsuit. 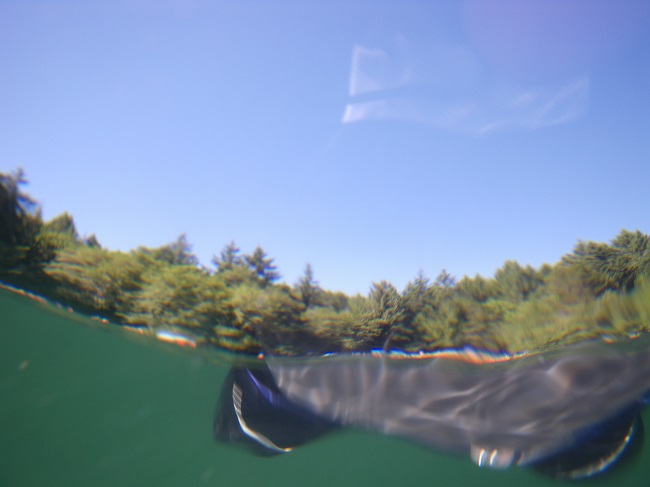 Here's a sketch of the setup:

The other cool thing about that picture is that if you zoom in on the beach, you'll see the colours separate (as if through a prism). This indicates that the index of refraction, n, depends on the frequency. This will be important when we relate all of this back to radio waves. 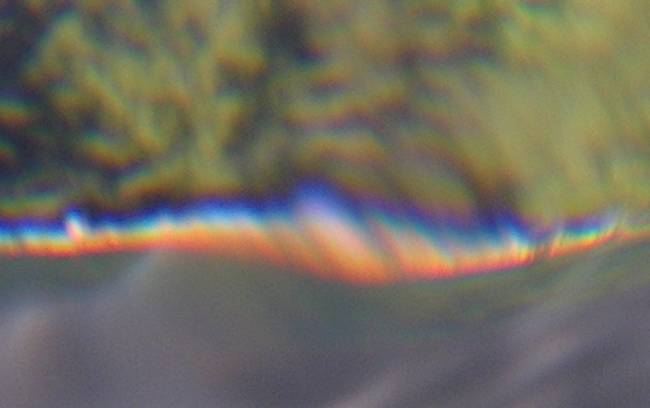 Snell's law gives the relationship between the angle of incidence and refraction depending on the refraction indices: \$$ n_1 \sin(\theta_1) = n_2 \sin(\theta_2) \$$

There are four interesting cases here:

Scattering occurs when an EM wave hits a bunch of “small particles” that in turn re-radiate the wave in all direction. Note that the “small particles” can be single atoms, molecules, dust, or pockets of gas with a different index of refraction. They can also be bigger objects like meteors or small planes! The size of the “particle” is always relative to the wavelength of the EM wave. To a 160m radio wave, a meteor is small, but to a laser beam (≈500nm), a dust particle is very big.

Here are a few examples5) in the visible light spectrum:

The first picture shows a laser beam shinning at the wall.

In the second picture, water is sprayed into the path of the laser beam. 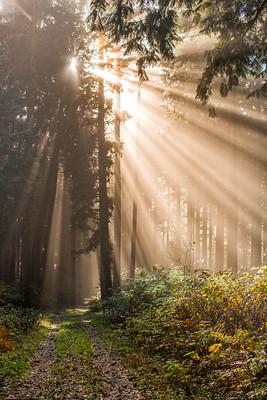 The reason the beam is invisible in the first picture is that all the light from the laser travels toward the wall (and none toward the camera). But in the second picture, the water vapour scatters some of that light in random directions, allowing some of it to reach the camera. There's a subtle point here: light from a regular light bulb also does this. What I mean is this:

Just as with the laser in the first picture, you don't see any light along that line. If you did, the entire room would be glowing white from all the different light rays that the light bulb emits. In fact, you can see this on a foggy day when it's also sunny. Or on a foggy evening when you're driving with the high beam on.

We'll talk about the effects of scattering on communications in more detail later because we need to see a few more basics first. But for now, we'll just say that a radio signal received through scattering will generally be weak, and suffer from rapid flutter or hollow sounding distortion.

It'll be weak because only a small portion of the energy reaches you (think of how much weaker the scattered light from the laser beam is compared to the what reaches the wall directly). And it'll be distorted because your antenna will be receiving the signal from multiple directions (radio wave-paths) at once (think of how you can see the green laser scattered by the mist as an extended line, instead of a single point). As we'll next, when a signal splits and takes different path (of different lengths), they recombined with a sort of “echo” can cause distortion.

Diffraction is the bending of waves around the corners of an obstacle or through an aperture. The diffracting object or aperture effectively becomes a secondary source of the propagating wave, which in turns can interact with the main wave or other diffracted waves.

All waves do this to an extent, but the phenomena is most pronounced when the the wavelength is of the same order as the size of the diffracting object.6)

Since radio waves can bend around obstacles that are similar in size to the wavelength of the signal, lower frequencies can band over hills and travel beyond the horizon as ground waves because of diffraction (more on this later).7)

And as we'll see in the next section, diffracted waves can also recombine with the original signal and create multi-path interference.

An important property of waves (radio, sound, water, quantum mechanical!, or otherwise) is that they can interfere with one another. Here's a Veritasium video showing how light going through two slits can interfere: In some places, the waves add up, in other places, they cancel out. Although not directly about radio waves, we saw in the intro that light and radio waves are in fact on the same electromagnetic spectrum.

Here's a computer animation from Wikipedia showing the same principle:

In terms of radio signals, every time you have more than one source (either because of reflection or because of another radio or antenna), you'll have regions where the signal fades and regions where it increases. Here's why...

More commonly, radio waves often suffer from multipath interference caused by some sort of reflection, refraction, or diffraction (from mountains, the ground, buildings, the ionosphere, ...) This leads to fading (QSB) as either the transmitter, the receiver, or the reflective surface moves.

This next animation shows the direct wave going from the transmitter to the receiver, as well as a wave reflected by the horizontal axis.

The first thing to notice is that when a wave reflects off a surface, it suffers a half-wavelength phase shift. This means that if the receiver is right next to the “mirror”, the signal will cancel out.

If the receiver then moves away from the “mirror”, the reflected signal has to travel over a longer distance than the direct signal before reaching the receiver. This means that phase between the two waves will change, sometimes cancelling each other, sometimes reinforcing each other. When the path difference (Δ) between the reflected and direct waves is a whole number of the wave length, the two waves cancel each other because of the half-wavelength difference from the reflection. But when the difference is a multiple of a half wavelength, the two waves add up constructively and the resulting signal is stronger.

In this example, if the receiver moves straight up, the signals will interfere destructively every 5 wavelength-units or so. This means that on the 2m band, the signal will fade every 10 meters or so. This is why the signal strength of a mobile station sometimes goes up and down rapidly as the car moves, which we call picket fencing.

1)
Picture from http://www.mrwaynesclass.com/lightOptics/reading/index02.html
2)
It takes light roughly 8 minutes to travel from the Sun to the Earth
3)
Picture modified from Wikipedia: Refractive Index
4)
Picture from Wikipedia: Total Internal Reflection
5)
The laser pictures were taken by Patrick, VA7FI with help from Justine. The picture of the forest is from: https://www.souvenirpixels.com/Photo-blog/i-cZgCHvZ
6)
The two pictures of diffraction were adapted from http://www.saburchill.com/physics/chapters2/0008.html
7)
Image of the radio tower and mountain is from https://kistodaynews.com/2017/09/12/scitech-magazine-waves/
howto/hambasics/sections/waveinteraction.txt · Last modified: 2021/01/03 08:08 by va7fi