Here we dive a little more deeply into waves and look at three ways that a “pure” radio wave (called the carrier) can be modulated to encode a voice signal (called the baseband signal): AM, SSB, FM.

But first, let's look at the general characteristics of a wave.

Here's a good introductory video for this section:1)

button on the bottom left corner of the picture). What's different about them? What's the same?

Imagine that the dots moving up and down create the waves that are travelling to the right (as we'll see later, this is kind of like how radio waves are created). Here are a few things to notice:

To quantify these observations more precisely, let's look at a snapshot of both waves frozen in time.

Now imagine that the animation is in super slow motion and that the waves are actually travelling at the speed of light, which is roughly 300,000,000 metres per second: How many times does each dot go up and down in one second?

Now, here's a related question: how long does it take for each wave to complete one cycle?

The time to complete one full cycle is called the period (T) and is the reciprocal of the frequency:

Where do the blue and green waves need to be so that...

If you press the play button

on the bottom left corner, you'll see the blue wave travel to the right and the green wave travel to the left. The red wave, which is the sum of the forward and reflected waves, oscillates up and down but doesn't travel anywhere, which means it's not going into the antenna.

While the animation is running, slowly decrease the amplitude of the reflected wave (VB) and you'll see that the red wave will start moving to the right. As you do that, notice how the SWR (Standing Wave Ratio) decreases toward 1:1. At this point, there is no reflected wave and all of the energy is going to the antenna (assuming no loss in the feedline).

Modulation is the process of “encoding” a message (be it voice or digital) onto a radio wave.

AM stands for Amplitude Modulation. What this means is that the transmitted radio wave is obtained by changing the amplitude of a pure radio waves (the carrier) based on an audio signal (the baseband).

Before we modulate the carrier, we raise the audio signal above zero to get an envelope:

Finally, we multiply the envelope and the carrier, which gives us a wave that has the same frequency as the carrier, but an amplitude that varies like the voice signal:

Let's pause for a minute and highlight that here, we are multiplying two waves together (not simply adding them). Later on, we'll see that the electronic component that does that is called a mixer, not to be confused with an sound mixer, which does do addition.

The incredible thing about the resulting AM broadcast is that the transmitted radio signal can also be seen as the sum of three pure sine waves:

This is absolutely not obvious but let's see why it's at least plausible. Imagine we start with the following three waves: 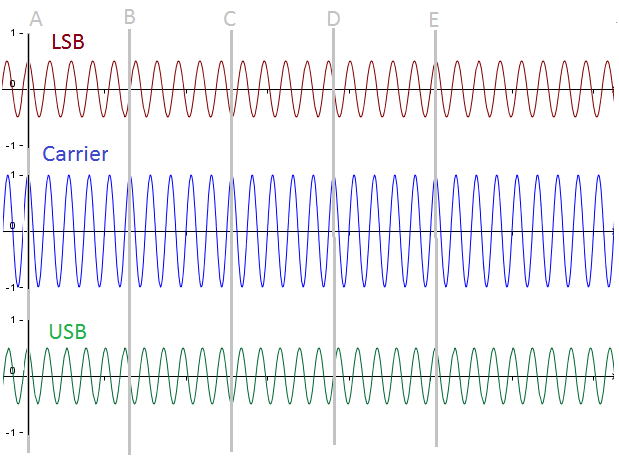 Now let's add them together. This is a bit of a mess, but let's look at specific places along the waves:

The result is the same as final AM signal:

Note that the carrier has a frequency of 200 kHz just like the original carrier, but the two side bands are 10 kHz lower and higher with half of the amplitude. Notice also how the LSB Wave oscillates slower than the Carrier Wave, while the USB Wave oscillates faster.

An easier way to represent a radio signal is using a spectroscope, which shows the frequency spectrum of a wave. That is, instead of looking at the signal wave itself, the spectroscope shows the strength of each frequency that makes up the sum of the signal.

For example, the spectrum of our 10 kHz note transmitted over a 200 kHz carrier would look like this:

There are three things to notice here:

One way of saving power (and reduce bandwidth) is to only transmit one of the side bands. In this example, the radio would be tuned to 200 kHz, but...

By itself, neither of these transmissions would carry the information we need (that the baseband signal was a 10 kHz note) since it's the difference between the sideband and the carrier that gives us that information. But if the receiver knows that this signal was generated by a transmitter at a frequency of 200 kHz, then the receiver can re-inject the missing carrier on its side.

This is why an AM signal is not too picky about being slightly off frequency (both the sidebands and the carrier are transmitted). But a SSB signal changes pitch if the receiver is not tuned precisely to the transmitter frequency.

In reality, the voice we transmit contains a whole group of “notes” typically between 300 Hz and 3000 Hz (music could range between 20 Hz and 20,000 Hz). A typical voice signal (baseband) could look something like this:5)

And finally, each individual sideband would look like this:

The two main advantages of using SSB (LSB or USB) are that:

Here's a screenshot of VA7FI's IC-7300 scope showing both modes on the same screen: 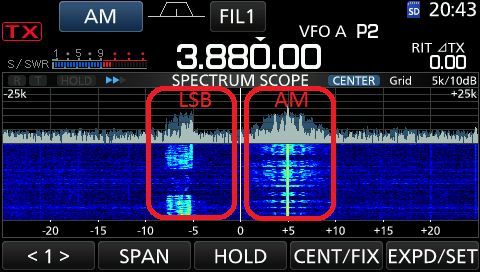 The radio is tuned to 3.880 MHz (where no one is transmitting), but there are two neighbouring conversations going on:

The scope shows the recent history of the radio signal (called waterfall) where the present is at the top and the past at the bottom. Blue represent a weak signal strength and yellow or red represent a strong signal strength. Here are some things to notice:

FM stands for Frequency Modulation. What this means is that the transmitted radio wave is obtained by changing the frequency of the carrier based on the audio signal.

For example, let's again transmit a single audio note of 10 kHz at a radio frequency of 200 kHz using FM this time instead of AM:

For those interested in some of the mathematical details, see this optional page.

1)
Dave Castler makes his videos for American Licences, which don't completely match the Canadian licences, but the concepts are the same.
2)
“ns” means nanosecond. “Nano” means a billionth of ___
3)
Fun fact: This is how noise cancelling headphones work. The headset has a microphone that picks up the noise, inverts the waves, and plays them back in the ear piece. The combination of the real life noise and the inverted noise being played in the speaker cancel out (somewhat).
4)
Note that 200 kHz is lower than commercial AM broadcast and is not a ham radio frequency. I chose a ratio of 20:1 so we can see the effects on the graph
5)
The next few images are from Single-sideband_modulation
howto/hambasics/sections/wavemodulation.txt · Last modified: 2021/01/03 08:09 by va7fi