This section outlines how to send and receive messages with Winlink Express. More information about how to configure the hardware can be found on the Signalink How-To.

When composing a new message, you must choose how the message will be sent:

So the steps to compose a message are to:

Before initiating a connection (section below), you can write and post multiple messages to the outbox first.

Before going into more details, it might be worth taking a small detour to learn about SSIDs (the dash number after the callsign) since it has a different meaning depending on whether it's for APRS or Winlink. See the SSID How-To for more info. 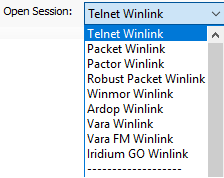 The type of connection needed is chosen from the Open Session drop down menu.

Messages that are marked to be sent as Winlink Messages require a Winlink connection:

For Winlink connections, the address and frequency of the session must match that of a RMS chosen (not that of the recipient). A list of RMS can be found in the Channel Selection table:

Once the table is updated, select an RMS near you, and ensure that the frequency of your radio matches that of the RMS listed in the table and press Start. At this point, two things will happen:

A few things to note about Winlink Messages: 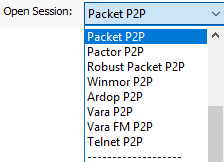 Messages that are marked to be sent as Peer-to-Peer Messages require a P2P connection:

For a Direct P2P connections, the address and frequency of the session must match that of a recipient (there is no RMS):

At this point, two things will happen:

This second point is worth highlighting: the session sends and receives messages. This can be useful in the case if the station you're trying to contact is off the air, but you expect that they'll try to connect to you in the near future. In that case, you can write them a message, post it in your outbox, and wait for them to initiate the connection.

It's possible to connect to a station out of reach using a digipeater. On Vancouver Island, multiple digipeaters are setup on 144.970 MHz with an SSID of -8 and require a Script to access. For example, for VE7HZF to send a message to VE7SCE via VE7LSO-8, all three stations need to be on 144.970 MHz:

If you monitor the traffic as you connect to the digipeater, you'll notice a few things:

Important Caveat: My knowledge of these stations is minimal. For more information, see:

If a Winlink station (-10) is too far to be reached directly, a digipeater station (-8) can be used to relay the message.

In this example, my message will be sent to VE7LSO-8, which will repeat it to VE7GN-10, which will then send it to the CMS via the internet.

Templates are a way to send complex pre-formatted html forms while keeping the bandwidth low. The basic idea is to:

The result is that both the sender and the receiver see the fancy form, but only the actual information is transmitted (not the formatting). Of course, this only works if both stations have the same local template, which is why it's important to keep Winlink templates up-to-date.

If you use the same template often, there are two things you can do to expedite the process.

The first is to set a template shortcut:

Many templates allow you to save the message body so you can quickly reload it later. In my example:

When it's time to use it:

I'm still learning lots about this so please consider this section to be vastly incomplete and probably wrong. – Patrick, VA7FI 2020/01/01 07:45

An easy way to connect a radio to a computer using a Signalink is to use the UZ7HO Soundmodem program (see the Signalink How-To for more information). But another really good program by UZ7HO is EasyTerm, which allows you to connect to another station and send specific commands to it.

This is the list of commands that this station accepts. For example, to learn what MHEARD does, type ?MHEARD. To use it, type MHEARD. 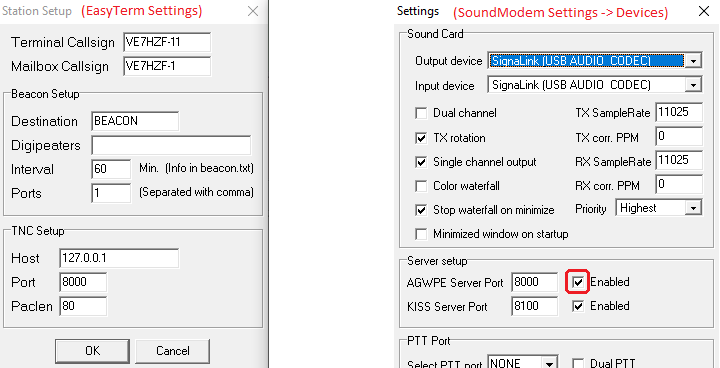