Winlink ARDOP is a method of sending “email” messages over HF radio via an RMS station. If you are new to Winlink, see the Winlink How-To first.

Every week, I connect to RMS stations in different locations and keep a log so I can track the most reliable ones. Here's the scenario I'm considering and how I'd use my log.

In the event of an emergency where the power, phone, and internet are all down, I want to be able to send my family back east a quick email to let them know that I'm ok, and offer the same service to others in my neighbourhood.

The first step is to select a list of stations I can connect to from my location. To do this, select:

These stations can also be visualized using the Map option or from the Winlink website.

Every week, I connect to RMS stations in different locations without actually sending or receiving messages just to see how long the “handshake” takes to see if I can connect at all.

I save the successful connections to my Winlink favourites for quick retrieval, but I also log them in a spreadsheet for further analysis.

The Winlink favourites list is a good tool, but it's hard to “rank” the best stations. To that end, I use a spreadsheet to log the following information in addition to the stations' info:

I also perform a crude approximation of the coastal distance of the RMS station. The rational here is that if an earthquake hits, there's a good chance that coastal RMS stations will be affected or overloaded so I want to be able to connect to a station further inland.

Based on all these different measures, I then create a semi-subjective ranking of the stations. Those are the stations I would try to connect to first.

The purpose of this spreadsheet is to do the “thinking” ahead of time so that in a real emergency, I can just look at the ranking to select the best frequency.

For more details on how I estimated the coastal distance, click on the link below:

I could manually look up the coastal distance of each station and note it, but that's a lot of tedious work. Instead, I used the distance and bearing between my station and the RMS station and performed some basic trigonometry to get an estimate.

To visualize the calculations, start with an Azimuthal Map centred at your location. 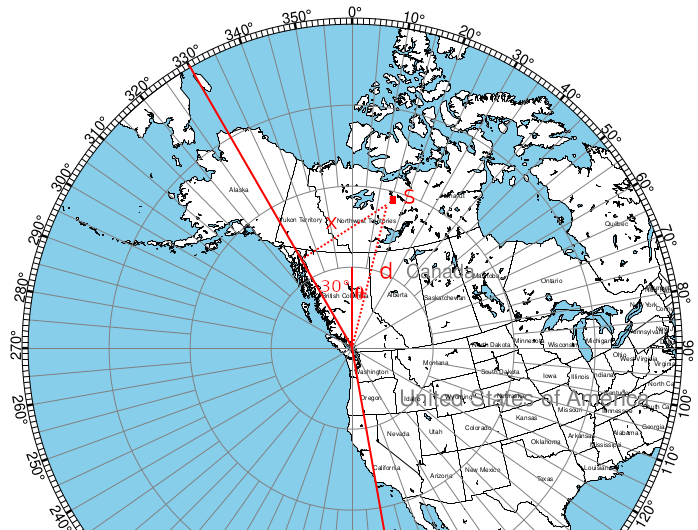 This is an approximation for two reasons:

That being said, my purpose is not to know exactly how far the stations are from the coast, but to be able to roughly rank them so that I can identify those that are the furthest inland.


Ardop vs Vara vs Pactor

So which is best to use? Well, it depends... For P2P, it's important that everyone uses the same method (and frequency), but for messages sent via an RMS, it doesn't matter at all.

It also depends on who's using it:

What is best for a local EOC?

Our local EOC reports to the SW PREOC in Surrey and their website says:

The preferred method is data rather than voice. If you cannot get through peer to peer, send the message via Winlink.

It then goes on to list HF Data frequencies but doesn't say which mode to use (as if that was obvious). But our local EOC has a Pactor modem so I assume that's the industry standard. But that only matters for P2P. Winlink messages sent to an RMS will make it to their destination no matter the method.

So for EOCs, the answer seems to be the current standard: Pactor

What is best for individuals?

Again, unless you want to use P2P, it doesn't matter if people are using different methods. Both Ardop and the free version of Vara seem to work, although the demo version of Vara also shows an annoying popup screen every few minutes asking you to register.1)

I understand the desire for standardization within a region. It would be nice if there was only one mode (and it was free), but given all the different options, I guess it's a trade-off between cost, community by-in, and speed.

Personally, I can't justify spending $100 from my limited ham radio fund just to get a Winlink speed upgrade. If the option was between having HF Winlink for $100, or no HF Winlink at all, I would spend the money, but $100 for a mere speed upgrade is below my diminishing returns threshold. There's a lot of more I could do to improve my station with that money.

The other thing to consider is that if Vara figured out a way to increase the speed in a closed-proprietary way, it's just a matter of time before the Open Source Ardop team catches up. Personally, I tend to favour open source options to closed proprietary ones not only because it's cheaper for myself, but also because it lowers the entry bar for others in the community to join. If HF P2P is really important for our community, then we probably don't want to exclude people who can't afford the $100 entrance fee. 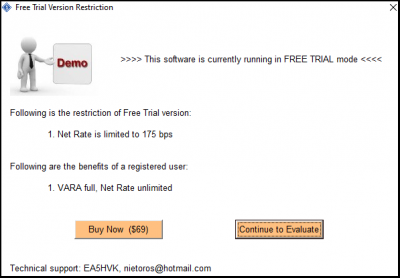